"Due to supply chain and shipping service delays, we are unable to guarantee delivery times, we appreciate your continued support and understanding"
866-654-8396 Contact Us
Temecula Olive Oil

Back History of Olive Oil

Olive oil has been documented in ancient literature as a source of sustenance and healing to peoples of the Mediterranean region. Homer even revered olive oil as “liquid gold” in The Illiad. At Temecula Olive Oil Company, we have discovered that Southern California olive oil is indeed causing a gold rush.

The olive tree has its “roots” in the Mediterranean region as early as 8000 BC and the juice of the olive fruit has been evidenced as early as 3500 BC to provide a source of food and healing. The history of olive oil includes uses in religious ceremonies from ancient until modern times and was so esteemed that it has even been discovered in tombs of Egyptian kings. The economic importance of olive oil from ancient times cannot be underestimated.

The hardiness of the olive tree and its centuries-long lifespan contribute to the spread of its cultivation throughout Western civilization. The tree’s deep and wide root system enable its survival in dry climates near the sea where the salt content of the underground water supply is high. Perhaps it is this knowledge that encouraged the Spanish missionaries to bring olive trees with them to The New World in the 16th Century knowing they could provide a source of economic sustenance and cultivate olives for olive oil to be used in their religious practices.

In 1769, Spanish missionaries planted the first Southern California olive groves at Mission San Diego de Alcala. The soil and climate are as ideal to support the growth of olive trees as the soil and climate in the Mediterranean. By the late 1700’s, Southern California olive oil was reported in the writings of Alexander von Humboldt to be “equal to that of Andalusia,” a coastal region in Spain where the climate is also similar to the Mediterranean. 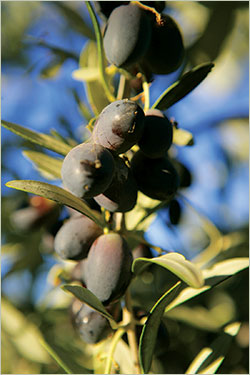 Call or Email with an Expert